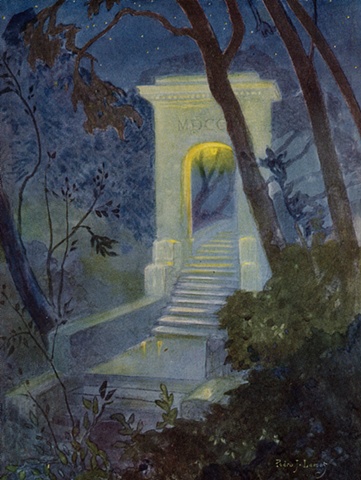 The Class of 1910 Bridge is a woodblock print by PEDRO JOSEPH LEMOS (1882-1954). The bridge spans Strawberry Creek in the center of the UC Berkeley campus. It was donated by the Senior Class of 1910 in honor of Phoebe Hearst, one of Cal’s most important benefactors. The Latin dedication on the reverse of the bridge’s arch contains a “typo” in its first word (“hunc”, Latin for “here,” originally inscribed in error as “hanc,”), evidence that even esteemed scholars make mistakes. The gaffe, pointed out by a student, was only rectified after the responsible classics professor had retired!