Portfolio > Hidden and Not So Hidden Gems of Berkeley 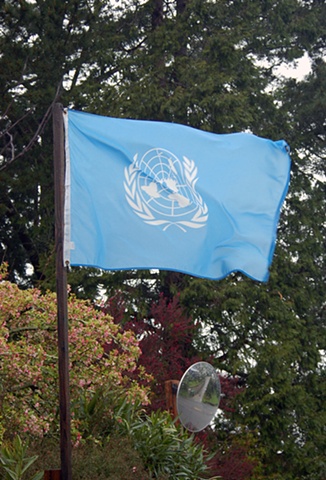 And last, but by no means least, albeit not art in any conventional sense, a United Nations flag waves in the breeze high over Berkeley on Grizzly Peak Road. I can think of no other city in the United States—our much larger neighbor across the Bay, birthplace of the UN, might possibly be an exception—where enough residences to be noticeable display this symbol of nations’ eternal hopes for a better world. Having spent more than 25 years on the staff of two other international organizations, members of the UN “family,” arriving in Berkeley had a feeling of coming home. In their own way, the International Monetary Fund and the World Bank, through their commitment to economic and financial stability and growth, including help for the world’s poorest, contribute to that clichéd dream of the Miss America finalist—world peace. It was, of course, said much better by my countryman, the ever romantic optimist, Robert Burns: “For a’ that and a’ that, it’s coming yet for a’ that, That man tae man the warld o’er shall brithers be and a’ that.”

And what could be more Berkeley than a’ that?