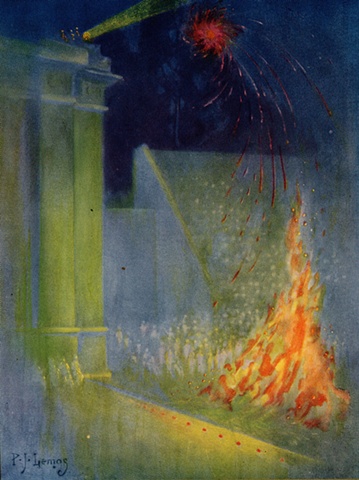 The Pajamarino Rally is a woodblock print by PEDRO JOSEPH LEMOS (1882-1954). The Pajamarino Rally, no longer celebrated, alas, began in 1901 when, one day, thousands of leaflets appeared on campus announcing a “Pajamahoolo.” It quickly became associated with the bonfire held in the Greek Theater on the eve of the Big Game against Stanford. Until its demise in the 50s or 60s, the rally maintained its pajamas-only dress code. An attempt to revive the Pajamarino Rally in the mid-80s failed, reflecting, it is said, a lack of enthusiasm due to the Bears’ dismal season at the time.